It was quite the wild weekend in the world of college basketball. After the No. 1 team in the country lost earlier in the week, nine more ranked teams went down on Saturday. In total, 18 teams ranked inside the Top 25 lost in a span of six days, muddling up what was already a rather foggy NCAA Tournament picture.

To complicate things even more, the NCAA Tournament Selection Committee gave a preview of the “current bracket” as it revealed its top 16 teams on Sunday, placing each of them into four separate regions and emulating the actual Selection Sunday process. The committee’s selections — especially after Saturday’s chaos — left all of us confused.

Is this what the 2018 Sweet 16 will look like? #BracketPreviewhttps://t.co/PxBQXWxUP0 pic.twitter.com/Rdru8SJez5

The consensus of glaring concerns from their bracket preview include Michigan State lowballed as a No. 3-seed; Kansas still on the 2-line after an ugly loss at Baylor; Oklahoma as a No. 4; and Purdue still on the top line after back-to-back losses.

While there is still a month to go until Selection Sunday, and this preview will have no bearing on the actual bracket in March, this left a lot of college basketball fans upset.

On Friday I gave you my first updated bracket in a while. I’ve updated it again following the madness of this weekend, now that we have a bit of an idea how the Selection Committee is viewing some of these teams, as well as how it seems to be implementing the use of analytics.

My projections used the Selection Committee’s bracket preview as a baseline, and went from there. My top 16 seeds don’t exactly match that of the committee’s, but it was a good starting point in terms of seeing how certain teams are valued. Without further ado, here is my breakdown of my bracket, region by region.

Note: These projections are based off what has happened so far this season, not based on what could happen. Conference champions/Auto-Bid winners are listed in ALL CAPS. 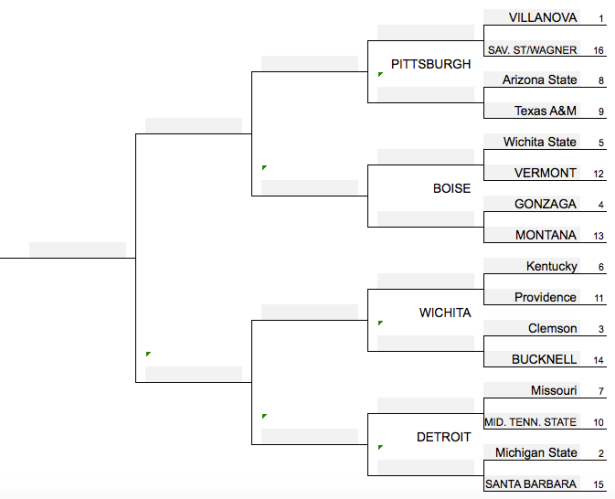 One thought on “Bracketology: Making sense of a wild weekend”